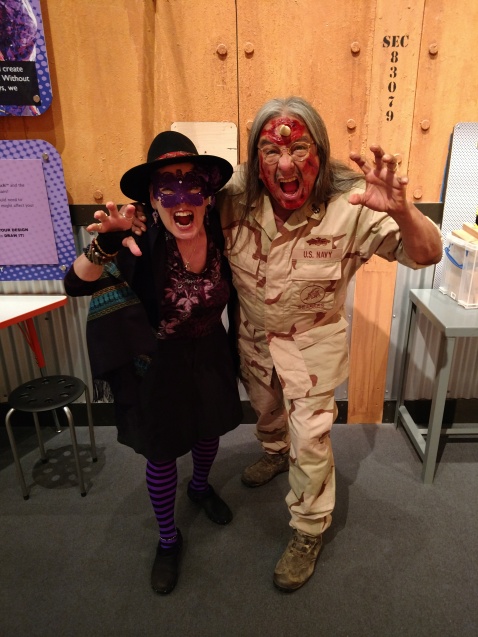 The ‘Seabee Zombie’ and his wife the ‘Mistress of the Night’ greeted the story telling guests to the event.

Halloween was celebrated at the U.S. Navy Seabee Museum with a story telling session by the Seabee Zombie. The STEM Center was filled with fog, the guest arrived, and the Seabee Zombie with his wife, the Mistress of the Night, appeared to tell stories from Eric Mills’ book, “The Spectral Tide: True Ghost Stories of the U.S. Navy.”  Stories were told of brave sailors who fell victim to the wages of war.

One story was of the Sullivan brothers, who all five perished in the Solomon Islands after their ship the USS Juneau was bombed, torpedoed, and sunk.  Stories were told of the USS Hornet, the most haunted ship in the Navy, such as the angry captured Japanese pilot. A kamikaze pilot missed his mark, rescued by the Hornet’s sailors, thrown into the brig, and then committed suicide.  To this day the kamikaze pilot still roams the brig, attacking whoever spends the night there. 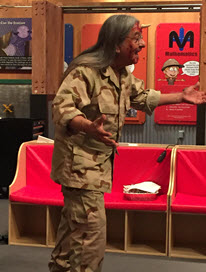 The ‘Seabee Zombie’ telling the story about the USS Hornet, the most haunted ship in the U.S. Navy and the captured Japanese kamikaze pilot.

Other stories included the USS Lexington and their friendly ghost everyone calls “Charlie” and the guilt-ridden officer’s ghost, who keeps trying to get back to his station on the USS Arizona after he left it for some insignificant reason just before the sneak attack, and was killed on the initial wave.

One story is of the “Smoking Man,” a sailor who observed the gathering ships for the Battle of Midway from the Atoll’s dock, who is still seen there to this day.  Stories were told of the USS North Carolina which is presently moored in Wilmington, as a museum.  Tourist have been scared-off the ship when they observed chairs moving by themselves, or the caretaker and his girlfriend who saw a face looking at them from a padlocked room on the ship when they were on the dock.  All enjoyed the afternoon of storytelling and sharing ghost stories.

For about an hour museum visitors were captivated by stories of haunted Navy ships, and bases. However, most important was the stories of the brave sailors who made the ultimate sacrifice.